Count Arnold is a single section 12pp booklet sewn into Buggra Butten covers with three engravings by Simon Brett printed from the wood. Originally published in Poems and Translations by Walter Shewring [Paulinus Press, Marlborough 1984] About 110 copies. £15 including UK postage. 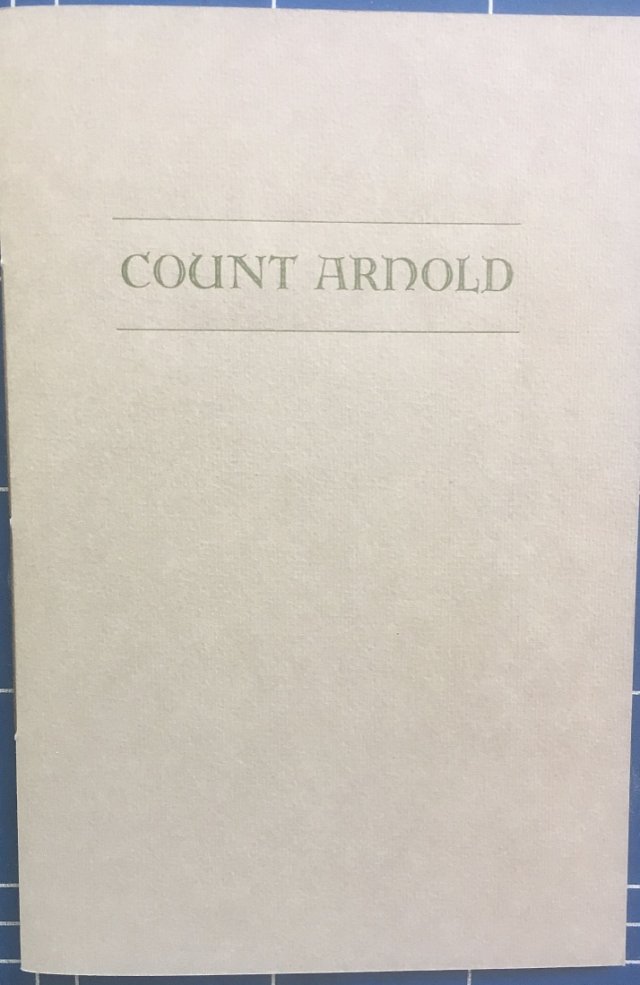 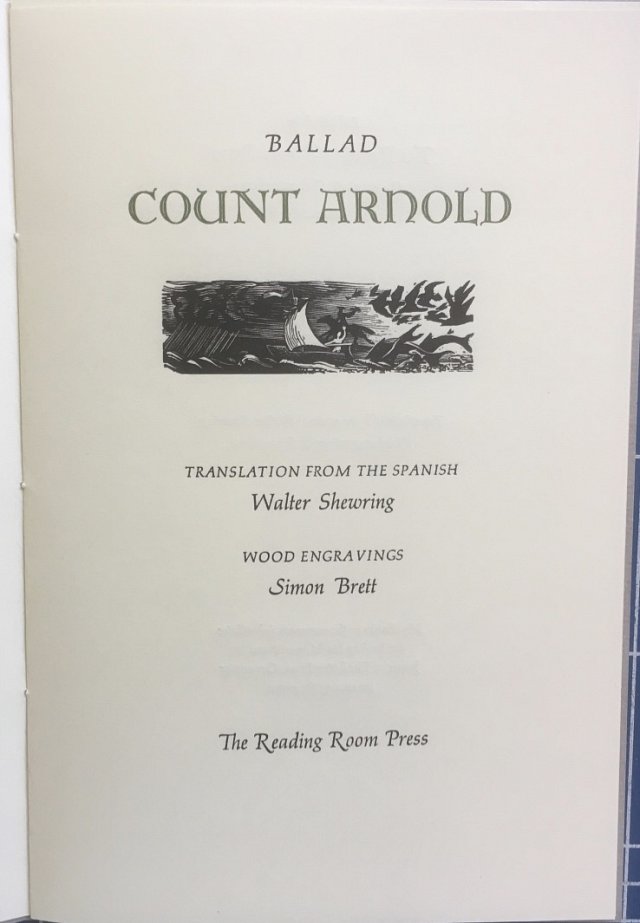 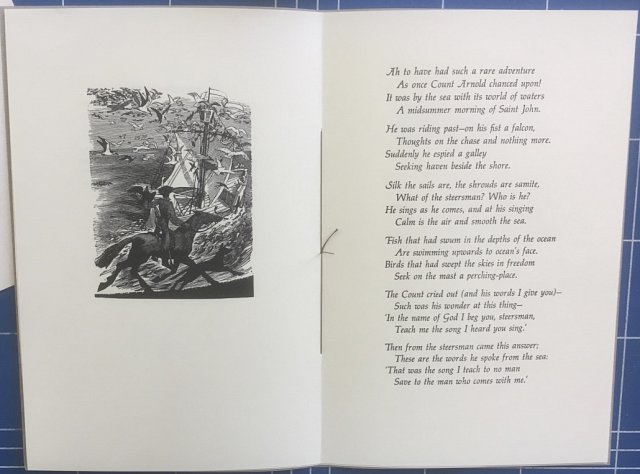 The second of three volumes of a definitive study of printing at the University Press in Oxford during its formative period. It is devoted entirely to the University Press’s third major resource: its type. Initially the Press was reliant on outside founders, then had its own foundry and the means to cut new faces, but by the 1730s it had ceased making its own type and was buying from the then established English typefounders, in particular Caslon and Baskerville.

The book contains sixteen photographs of contemporary documents and five photographs of ancient punches and matrices. The de luxe edition additionally contains a portfolio of leaves from books printed at the Press from each decade in the period concerned. The book makes 168 pages and the page size is 276 mm by 216 mm. The text is set in 12pt Monotype Van Dijck and printed digitally on 148gsm Mohawk Superfine paper. The end-papers are also Mohawk Superfine.

There are 200 standard copies (£125). Fifty de luxe copies are quarter-bound in dark brown leather with a paper specially marbled by Jemma Lewis on the boards. The texts in the portfolio have been printed letterpress in Monotype Van Dijck. The book and the portfolio of leaves are presented in a cloth-covered slip-case in brown cloth (£350). For more details see www.theoldschoolpress.com. 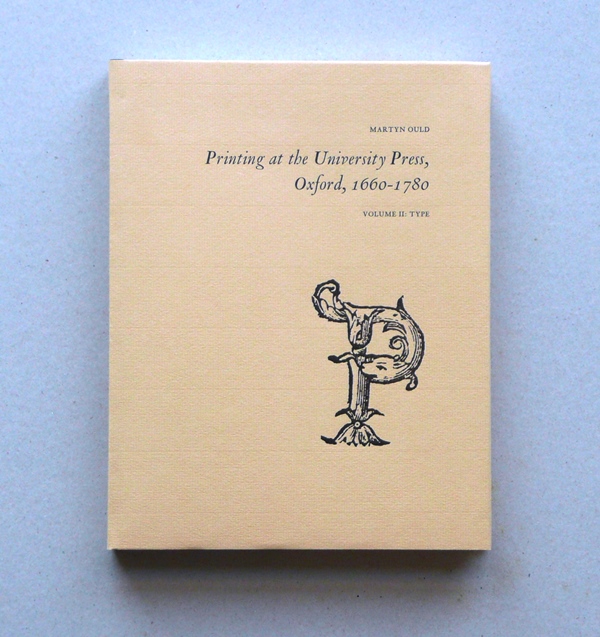 Paper making by hand in 1953 by John Barcham Green

In 1953 English paper-makers J. Barcham Green Ltd issued a modest booklet describing in detail the process of making paper at their Hayle Mill. A thousand copies were printed on Barcham Green papers but, perhaps because of its somewhat ephemeral nature, it is seldom seen. In this reprint we have not tried to produce an exact facsimile of the booklet, but we have followed the flavour of the original in structure and typography. The text was written by John Barcham Green and is splendidly detailed in its description of the process, and as such it is an important authoritative text by one of England’s greatest paper makers.

The original 1953 edition included sixteen photographs of the process as described, showing workers at the mill, poised at the various stages – at the vat, couching, drying, etc. – but they were small and not ideally printed as half-tones. Better prints of the photographs have been scanned for giclée printing at The Old School Press. In the original booklet some photographs were severely cropped thereby losing interesting detail, and then printed at a small scale. For our reprint we have printed the entire original photograph in each case, without cropping, on an A5 (210 x 148mm) sheet of Hahnemühle Photo Rag Baryta.

The text of the booklet has been printed on Barcham Green’s Finale paper and the cover on their Chatham Royal. The text makes twenty pages and has been printed in 12pt Monotype Caslon with the titles in various sizes of Caslon Old Face from the Stephenson Blake foundry. The binding takes the form of a simple case covered in Barcham Green’s Antique Rose, with a pocket on the inside of each board, one holding the booklet and the other holding the sixteen photographs loose together with a sheet of captions. The edition consists of 130 copies of which 100 are for sale. Copies are £105 each. For more details see www.theoldschoolpress.com . 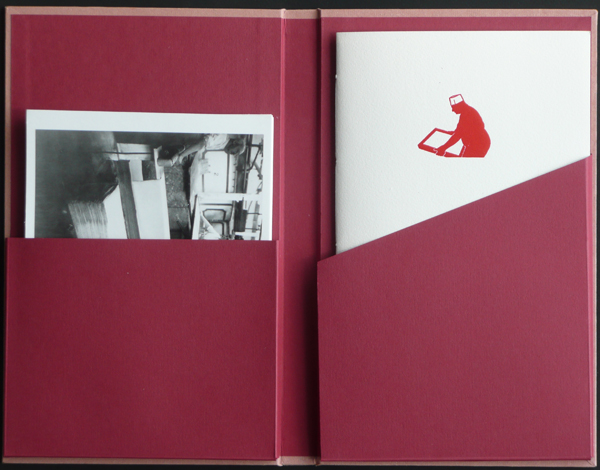 Zapf and Stauffacher by Ferdinand Ulrich

When the Hunt Roman type was first made available to the Hunt Botanical Library in Pittsburgh, the event was marked by the publication of a slim volume entitled Hunt Roman: the birth of a type. It noted that the new type came about as ‘the fruition of a combination of ideals, concepts, and convictions of three personalities’: Mrs Hunt, after whom the Institute is named, type designer Hermann Zapf, and typographic designer and printer Jack Stauffacher.

While a visiting student at Carnegie Mellon University in Pittsburgh in 2010, German typographer and type historian Ferdinand Ulrich came across the legendary type in the hot-metal setting workshop of the university. His subsequent intensive research in archives and collections, a stay with Stauffacher in San Francisco, and correspondence and meetings with Hermann Zapf have led to lectures and journal articles on this historic type, and in this essay he reveals how the collaboration between Zapf and Stauffacher developed in the 1960s.

His essay runs to 3,400 words and has been printed in 14pt Hunt Roman on hand-made paper from the Czech Velké Losiny mill and presented as a single section sewn between boards. There is a photograph frontispiece of Zapf and Stauffacher in conversation. The edition consists of 125 copies of which 100 are for sale at £75 each. For more details see www.theoldschoolpress.com. 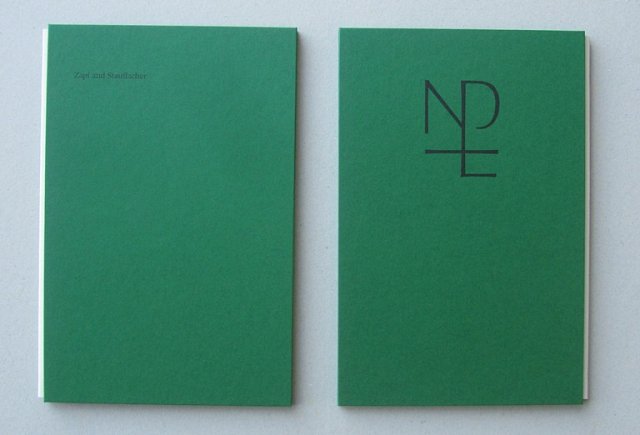 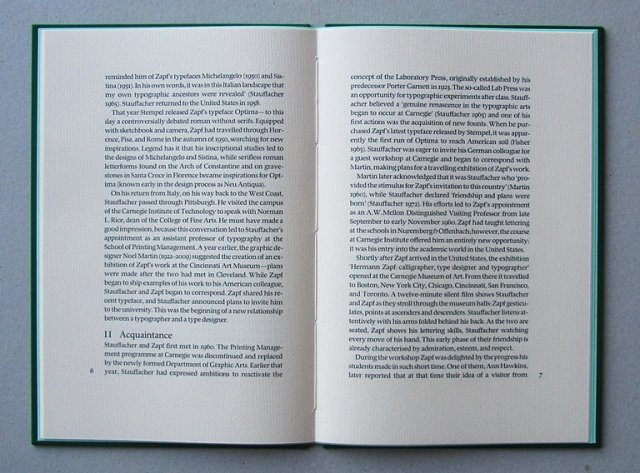 ‘The Young Tamlane’ is an old Scottish ballad concerning the rescue and disenchantment of a childhood lover betrothed to our heroine, Janet, from the fairy Queen. It is a letterpress printed limited edition of 50 hand typeset in Monotype Centaur, with a 4 colour reduction lino print on the title page, and hand bound all by myself.

I first heard this ballad on the 1969 album, Liege and Lief by Fairport Convention. Their version is called Tamlin and was transcribed to modern English from the old Scottish, so to avoid copyright issues I went back to the 1857 edition of English and Scottish Ballads edited by Francis James Child.

You can order a copy from my Etsy shop: https://www.etsy.com/uk/listing/702435121/tamlane-taken-from-english-and-scottish 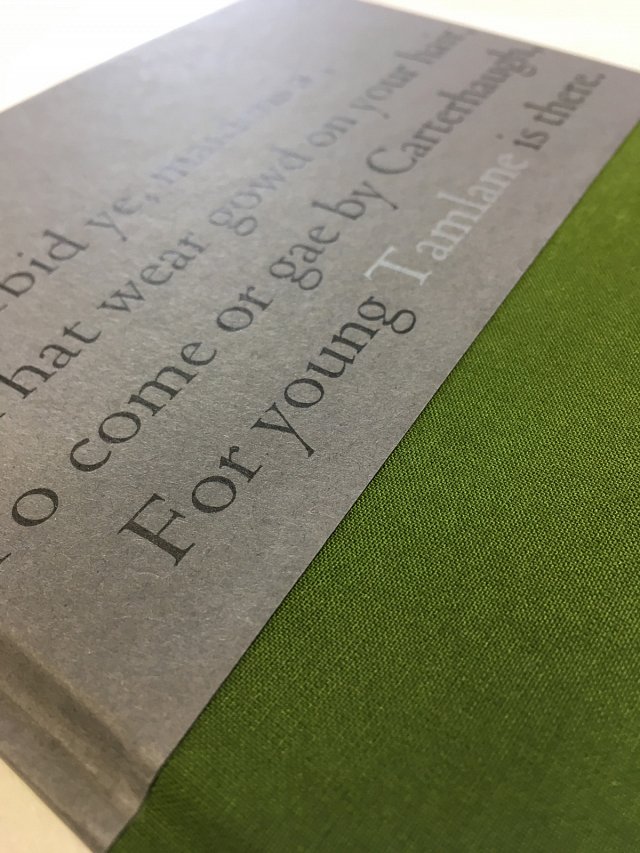 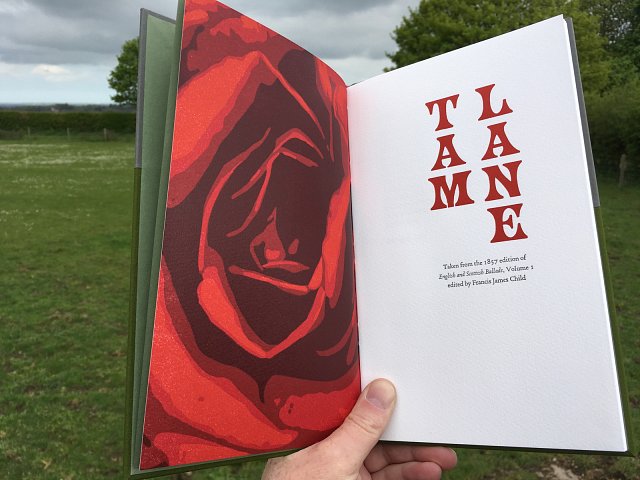 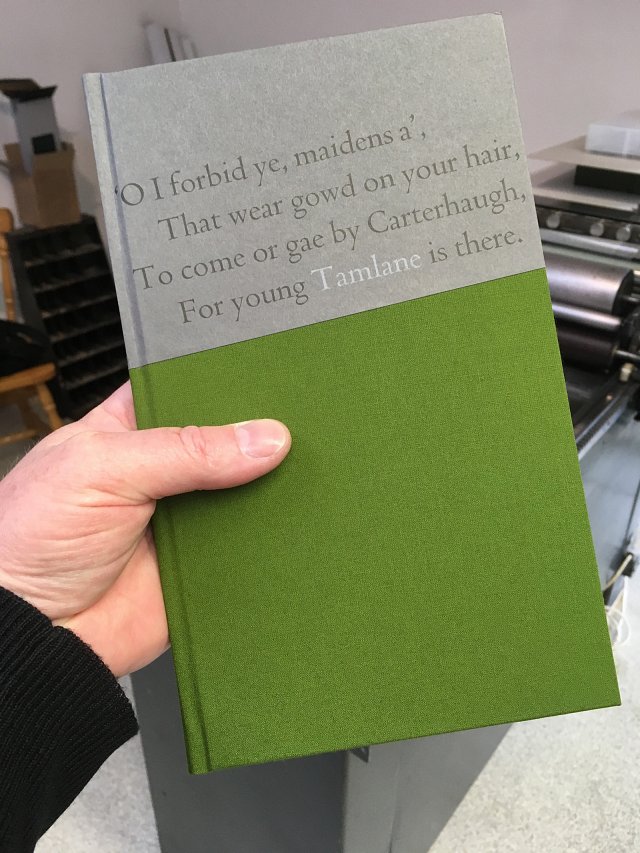 Defense Of The Realm: Regulation 21A by Simon Pilkington

A3 Poster set with wood & metal type & a linocut pigeon.

The Defense Of The Realm Act was set in place at the start of the First World War, giving the government special war time powers.

Regulation 21A was set in place to try to protect any pigeons in transit. Pigeons being vital in carrying messages for the war effort across the English Channel.

Unfortunately I didn’t have all the historically correct typefaces necessary – but it was an enjoyable print to make. 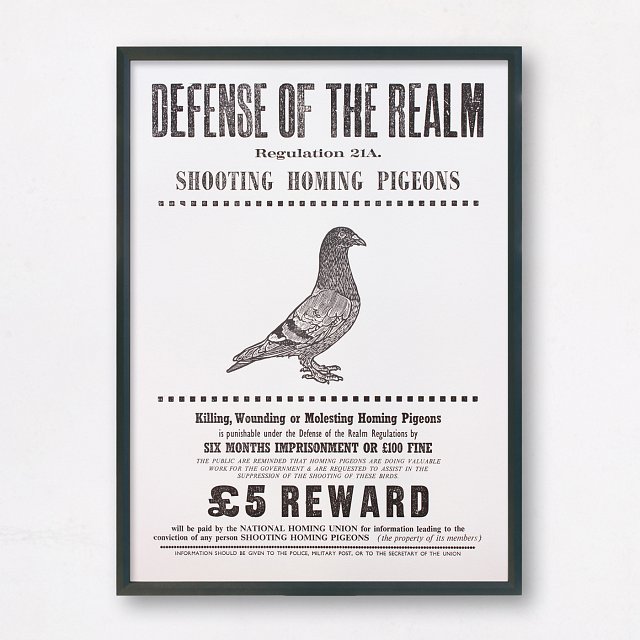 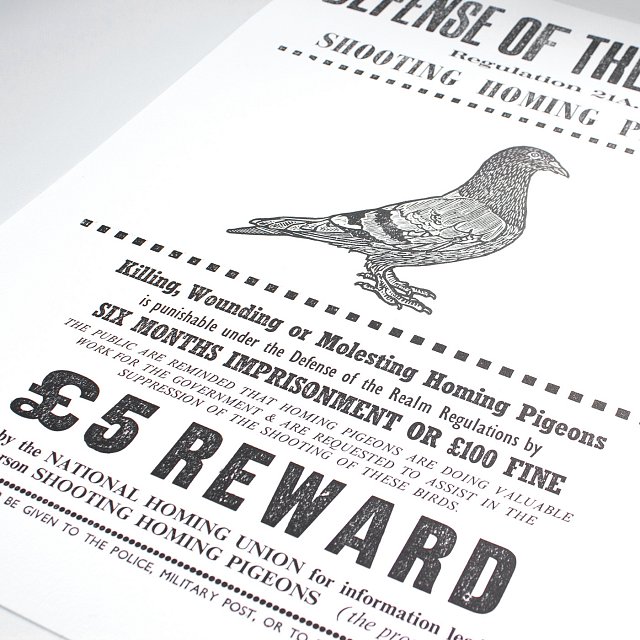 If you are a member of the OGP and wish to promote your new work please contact the web manager with details.